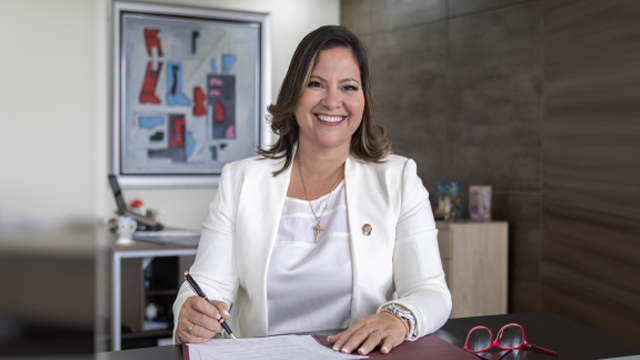 Finding Cecilia in her office surrounded by her collaborators or students who want to talk to her is something common. Although it is not uncommon to see her sharing a bike ride or playing basketball to take advantage of the magical setting offered by the ESPOL Gustavo Galindo Velasco campus. Receiving an email from Cecilia that includes a link to articles on various topics or finding a book on her desk accompanied by a note written by her is commonplace.

Cecilia is a multi-faceted woman whose essence is the curiosity and will of a person who never stops learning. This attitude towards life is congruent with her motivating thought "if you disagree with something, don't expect someone to change it, but work hard to make that transformation possible". That reflection promoted her participation in the processes that led her to the Academic Vice-Rectorate in 2012, and in 2017, to the ESPOL Rectorate, an institution that she, from her home, learned to love.
Her interests range from research in Materials Science and Engineering, Entrepreneurship and Innovation Education, and the generation of spaces for equal opportunities to respect the diversity of all people, especially the inclusion of women in spaces such as Science. and Engineering.

Being one of the few women studying Mechanical Engineering at her alma mater, she understood that differences exist in the essence of a cultural identity, that it can and should be modified, but she also managed to visualize that the restrictions are self-imposed, and that her path would be as long as she wanted to travel. And she was shaping her destiny from her preparation. Her goal at the end of her degree was to pursue a master's degree, which she achieved at Rutgers – State University of New Jersey – by obtaining her postgraduate degree in Materials Science and Engineering, and then making her way in the Ecuadorian industry. But such route took a detour and she made the decision to go through it, obtaining her doctoral degree. Her decision was considered and she understood that it would mean the beginning of her career as an academic. This meant a change of plans that forged her flexibility in her life. As she would say sometime, years later, in a meeting with her collaborators: “you can change your plans in life, what you can't do is simply act without thinking”.

Committed, upon returning to ESPOL, she maintained initiatives that allowed her to accumulate experiences in teaching, research, outreach and management. Her desire to generate knowledge led her to lead the Non-Metallic Materials Research component of the VLIR-ESPOL Program – emblematic in the institution for its promotion of research culture – and found the Nanotechnology Research and Development Center (CIDNA). ). However, she visualized that the necessary interaction between academia, industry and society was not germinating in the country and that ESPOL had to create strong and lasting links.

Consequently, she directed an effort to provide services of proven quality and articulated the productive sector and the Ministry of Industries and Productivity to obtain funds that allowed the Laboratory of Metrological and Materials Testing (LEMAT) - founded by her - to become a a laboratory that brings together high-tech equipment that cannot be found, all together and with the necessary qualified personnel, in any other laboratory in the country.

Main architect of her destiny, she decided not to rest and, being the only woman who held the title in the Mechanical Engineering career, she was elected as sub-dean of the Faculty of Engineering in Mechanics and Production Sciences (FIMCP). During the three years of this administration, she strengthened her desire not to be a conventional teacher: it was not about teaching something but about training a professional who can serve society. This vision influenced her work as Academic Vice Chancellor, leading a comprehensive curricular reform.

She worries and takes care of herself: ESPOL must train professionals with the technical capacity that has characterized it, but who contextualize their knowledge by being, as the essence of the country's social improvement, responsible citizens. Her ideas always go hand in hand with her actions, and for this reason, she did not limit herself to her chair in the area of materials and became involved in the institution's entrepreneurship initiative. As a teacher, she has sought to motivate her students, showing the importance of a deep education, and being a living example of how dedication and perseverance pay off.

Her commitment to serve led her to be elected an academic member of the Council of Higher Education of Ecuador (CES), being President of the First Provisional Council. Also as President of the Latin American and Caribbean Consortium of Engineering Institutions (LACCEI), she showed her clear interest in promoting education not only in Ecuador. These accomplishments, as well as her hard work in her ESPOL, earned her the Rutgers Distinguished Alumni Award. She has been part of international forums on Higher Education such as those sponsored by Universia and the Rockefeller Foundation.

In July 2017, she was chosen as the first woman to hold the ESPOL rectory. With 211.66 votes, Cecilia Paredes Verduga and Paúl Herrera Samaniego were elected to direct the Polytechnic of the Coast for the period 2017-2022.

In the 2020-2021 period, she was also president of the Higher Council of the Space for Women Leaders of Higher Education Institutions of the Americas (Emulies), a program of the Inter-American Higher Education Organization (OUI-IOHE).

Currently, she is president of the Ecuadorian Corporation for the Development of Research and the Academy, CEDIA, where she promotes the exploration and results of innovative projects that link Ecuadorian institutions, which links researchers, teachers and students through projects , competitions and scientific development initiatives.

Her interests range from research in materials science and engineering, education in entrepreneurship and innovation, and the generation of spaces for equal opportunities to respect the diversity of all people, especially the inclusion of women in spaces such as science. and engineering.

Although these distinctions are always important, her driving force lies in her affections. Tireless, she works every day with her husband to succeed in her most important effort: to provide her children with a family that guides them to be good people.